COMMENTThe Birth of Nike Inc. Let the Altars Shine
The Swoosh Story is a creative intepretation of facts; for the authorised history of Nike Incorporated please visit the link provided in the sidebar.

The plot is as follows:

In 1843, the people of Oregon voted to stand independent of both the United States and Great Britain. The people had strong self-determination and, soon after, signalled it with a Latin motto, 'alis volat propriis', which means 'with her own wings she flies'. This phrase refers to a trust in the winged goddess of Victory and acted as a dual call against passivity and to action.

In American culture, the Blue Ribbon is given in recognition of first place in competition and it is equivalent to the olive wreath that, in ancient Greek culture, signifies Victory. It also has a further connotation; the knights of the chivalric French Order of the Saint-Esprit, the daimon of Nike as the Holy Spirit, were known as the Cordon Bleu, the Blue Ribboned Ones.

Blue Ribbon Sports began trading in 1964 after concluding a deal with an established Japanese order called Onitsuka Tiger. Onitsuka (鬼束) means 'Spirit beam' and it refers to the daimon of Nike as the Holy Spirit depicted as a bluish beam of light emanating upward from the ground. The Japanese tiger symbolised invincibility, power and might, known in ancient Greek as Zelos, Bia and Kratos. Onitsuka Tiger would later rename itself ASICS, an acronym for the Latin phrase, 'anima sana in corpore sano', which means 'a sound spirit in a sound body'.

By 1971, Blue Ribbon had outgrown its relationship and began weaning off the Tiger in search of the holy grail of success and this led to the creation of the legendary Swoosh and an innovative line of footwear bearing the name 'Nike'.

The visionary Knight commissioned Carolyn Davidson to design a static symbol that would convey motion and spirit. Swift as a skilful squire, Carolyn came up with the Swoosh that, within a generation, became the most recognisable logo in the world, ahead of the Adidas’ three stripes and the Christian cross.

In a dream, Carolyn smiled at a swan gliding across a lake and, in waking, she thought how gracefully the swan swam, how it moved in space without moving a single feather. Minutes later, the Swoosh was born at the tip of her pencil as the swan in abstract and Blue Ribbon’s primary colour became ‘Swan white’.

The significance of the Swan goes beyond its natural representation to the events in my life where I acquired a beautiful pair of swan wings but that is another plot line, so let us turn to the word 'Swoosh'.

'Swoosh' This is a 1942 advertisement for ‘Swan’, a popular brand of hand and bathing soap. The ‘Swan’ brand was a marketing master class. Its advertisements were always fun and engaging; it regularly gave wonderful posters and trading cards to its loyal customer base; and it sponsored the best radio broadcasts of the day, including the ‘Bob Hope Show’ and the ‘George Burns and Gracie Allen Show’, whose hosts would cleverly weave in a song or two promoting the soap in each episode.

Encouraged by his newspaper publishing father, a five-year-old Knight loved reading and one day he came across this advertisement of a brand he was very familiar with, and its impression was to remain in the young child’s consciousness thereafter.

At university, Knight was a successful middle-distance athlete, a discipline that requires a combination of speed and stamina, where one has to be ‘fast’ and ‘last n’ last’. After graduating with a degree in journalism, Knight pursued the ‘rich’ part of the advertisement and subsequently enrolled into the Stanford Business School. To a Knight ‘richness’ is not measured in the armour he wears, the horse he rides upon, the castle he lives in, or the gold he has stashed away in a treasure chest; it is measured in his courageous and noble deeds, akin to entrepreneurship. Knight combined ‘rich’, ‘fast’ and ‘last n’ last’ to create an innovative sportswear company with the marketing nous of the 'Swan' brand.

Carolyn's 'Swan' logo design awoke Knight's remembrance of the advertisement and he considered ‘Swoosh’, an onomatopoeic word conveying the motion of suds, as its perfect match. In light of this, Knight strove to understand how 'suds', the remaining part of the advertisement, could be applied to his business. Suds were bubbles, pockets of air held within a foamy substance; and after eight years of research, Knight finally received the answer in the form of the revolutionary Rudy ‘Air’ cushioning unit.

As the legend goes, the day the Swoosh logo was presented to Knight, he asked his team to rebrand the company name. That night the name 'Nike' stirred up in the mind of the genius Jeff Johnson, and 'Nike' began to appear on some of the company's shoe lines. However, it was not until 1978 that the timeless 'Nike' replaced the antiquated 'Blue Ribbon' moniker.

In 1978, the Knight of the Swan overcame the death of his friend and fellow athlete Steve Prefontaine that occurred three years earlier, and under the influence of the sublime 1977 Jim Steinman song called 'Heaven Can Wait' and a 1978 Warren Beatty comic movie of the same name, he decided to risk everything he had by rebranding the company as 'Nike'.

The angelic main character in the Warren Beatty movie went by the name 'Mr. Jordan'. This fact was not lost on 'Nike' when, in 1984, it risked everything by endorsing an unproven basketball player by the name of Michael Jordan; a man who, imbued with the spirit of Nike, would achieve great sporting honours and would have a profound and inspirational effect on society for years to come.

In 1988, the wizard Wieden conjured up the phrase 'Just Do It', a dual call against passivity and to action, as the main slogan for what was, by then, the most successful sportswear company in the world.

This, then, is the Swoosh Story; with the birth of 'Nike' complete, the future beckoned and what a future! 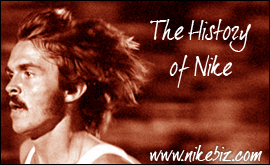 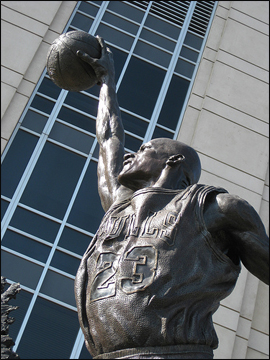 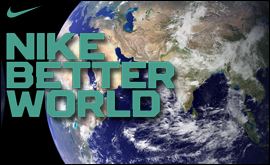 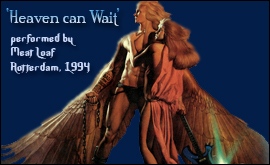 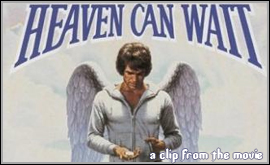