With innumerable monuments acrossed the world dedicated to her vision of Victory, Nike is the most celebrated goddess in human history. In this section, we survey the most prominent of these sculptures, providing a description, information and, at times, an interesting story behind the representation. 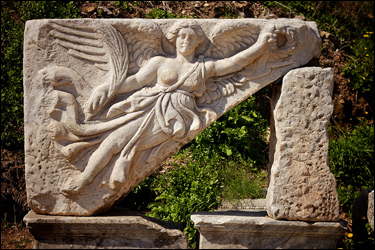 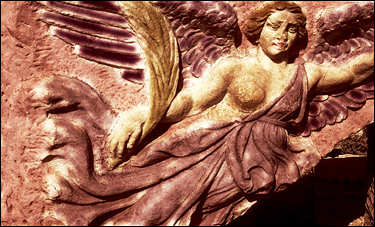 This is a strong yet delicate representation of Nike, often referred to as the winged angel of Victory, which stands triumphantly at the heart of Ephesus, a town situated in the south west of modern-day Turkey.

This relief sculpture portrays a wholesome and hearty Nike, with wings fanning out, in glorious flight. Her draped garment (peplos) is wind swept and, in the classical style, exposes a well-rounded breast and her trailing leg. Her leading hand clutches a plaited crown of olive leaves (kotinos) and her trailing hand nestles a palm tree branch. The crown symbolises ‘Victory’ and the branch symbolises the 'fruits of Victory' such as peace and prosperity. It is significant that her leading hand holds the crown because it highlights its primacy over the palm branch that is caressed by her trailing hand. Victory precedes peace and prosperity; there is no higher achievement than Victory and it brings forth the best rewards.

This sculpture was made on a triangular block of marmoreal stone that was probably sourced from a local quarry. Originally, this block was half of a towering monumental arch that led into the centre of Ephesus.
The arch was later identified as the ‘Gates of Hercules’, when freezes depicting the hero’s exploits were adjoined to the building, some time towards the end of the 4th Century AD.
At present, the triangular structure, supported by a stone block, has pride of place at Domitian Square as the main tourist attraction in Ephesus.

The sculpture’s symbolism suggests it was the work of a Nicolaitan during the 2nd Century AD.
The word ‘Nicolaitan’ comes from the Greek words ‘Nike’ (‘Victory’) and ‘Laos’ (‘The People’) to mean the ‘Devotees of Victory’. Please note that this means that the Nicolaitans do the bidding of the Daimon Nike within their own persons, rather than the bidding of the Goddess Nike.
The Nicolaitans were a heterogeneous people who advanced pragmatism in public life and this doctrine advocated a syncretism between the monotheistic doctrines of the Hebrews and of Yahushua (Jesus) and the polytheism prevalent in Greek and other Near Eastern religions.
The Nicolaitans were much maligned in the biblical books 'Apocalypse of John' and the 'Epistles of Paul' for this practice.
We saw that the symbolism suggests that Victory leads to peace and prosperity and this is fundamentally opposed to Yahushua’s teachings that peace and prosperity can only be attained by Submission to the Divine Will.
Over time, the Nicolaitan perspective of Victory flourished over the Messianic perspective of Submission and this led to Christianity, complete with its non-Hebreiac features that persist to the present day. These features include: the idea of Man as God (the presence of Daimones within Man); the tripartite separation known as the Holy Trinity (Theoi, Daimones and the prominence of Man); the transfer of the Sabbath to the allotheistic Sunday; the transformation of pagan festivals into Saint days and ritual celebrations; and the creation of the persona grata called ‘Jesus Christ’, in preference over Yahushua Messiah, for a Grecophiliac audience because ‘Jesus’ resembled ‘Zeus’ (known to the Romans as ‘Jupiter’), the principal deity of the Greek religion, and 'Christ', which comes from the Greek word ‘kristos’ ('the annointed') that was frequently appended to the name of sages, priests and mentors in the ancient and classical world. 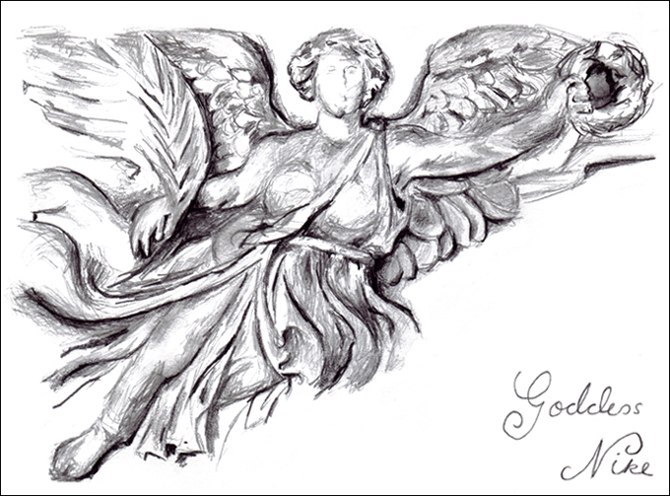 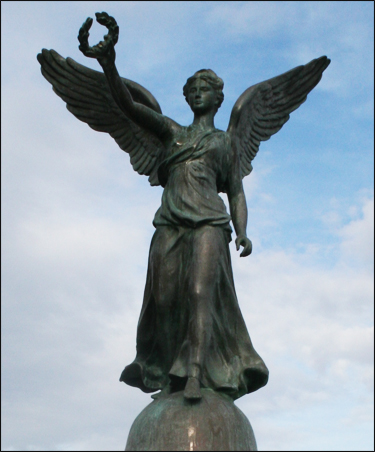 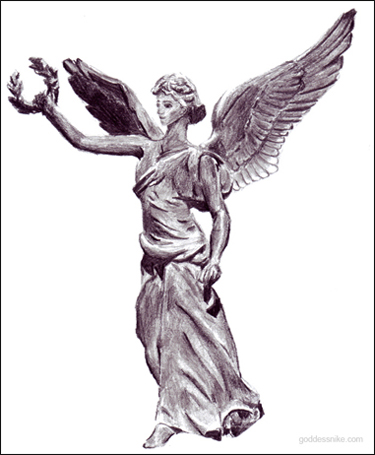 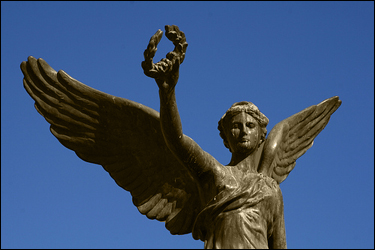 This elegant representation of Nike is located in the main square, by the town hall, of Rhodes City on Rhodes island, which lies in the south-eastern extremity of the Aegean Sea.

Arm aloft and holding that symbol of Victory, the olive wreath (kotinos), this statue salutes the seafarers newly arrived or well-wishes departing ones from her hight perch in the Mandraki habour district. Her wings, up-spread and fanning out behind her, give the impression that they are fluttering as if they are waving at the viewer and this also gives the appearance that Nike is hovering on the spot. Her dress is seemly by its simplicity and we feel a warm gentle breeze in its folds. Her delectable feet, peeking out from her dress, stand upon an orb and this symbolises an idea that Victory treads gently over the world.

Since ancient times, Nike has had a strong association with both military and non-military seafarers, who understood that each landing was Victory against the capricious and ruthless sea, as personified by Poseidon.
Furthermore, from the classical period, around the 5th Century BCE, to the 4th Century CE, one could not only find her statues in every major port across the Mediterranean Sea but also on the prow of almost every vessel sailing on it.
However, Christians, particularly the Nicolaitans, sought to syncretize so-called 'pagan' deities and rituals and this process increased in scope upon the Christian conversion of Constantine, Emperor of Rome, in 310 CE.
Nike, the patroness of seafarers, was replaced with a Christian patron who, appropriately enough, was named Nikolaos of Myra, better known to us as Saint Nicholas, and lived between 270 and 343 CE.
'Nikolaos' is composed from two Greek words: 'Nike' (Victory) and 'Laos' (The People) to mean 'The People of Victory'.
Myra was a town situated near Finike, in the province of Antalya in modern day Turkey, and it was under 100 miles from the statue of Nike in the Mandraki habour in Rhodes city.
Nikolaos of Myra, a good man by all accounts with a reputation for being a discreet and generous giver of gifts, was attributed with miraculous - mythic - powers such as reconstituting dead and disembled bodies (Victory over death) and for this he was canonisation and made a Holy Saint.
Following his death in the December of 343 CE and his canonisation, Saint Nicholas became increasingly popular in the Christian imagination and it was decided to consecrate a feast day in honour of his charity, kindness and gift-giving.
This day superseded a 'pagan' festival devoted to the unconquerable and life-giving Sun god (Sol, Helios or Ra) and the powerful order-giving god (Jupiter, Zeus or Horus) and participants would treat each other with food in a communal feast.
By 354 CE, this feast day became known as Christmas, a day to celebrate the greatest gift givers in Christianity, and it commemorates Lord God's gift in the form of Jesus as well as the gift of Salvation, which Jesus bestowed upon mankind. 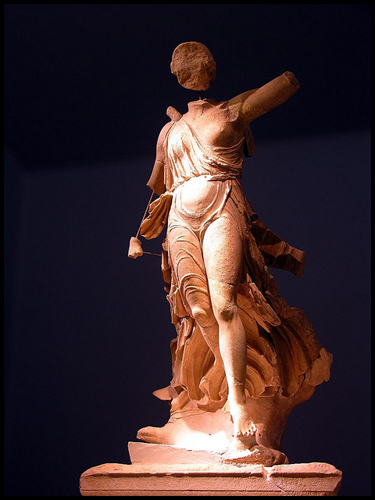 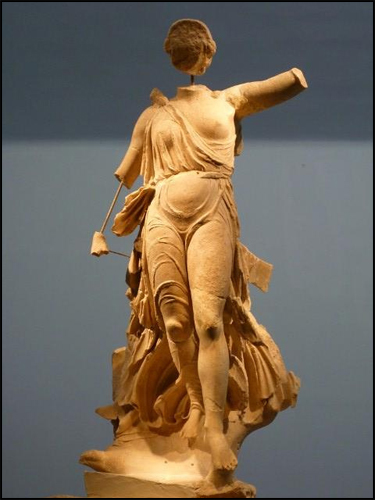 Nike by Paionios at Olympia, Greece

This is a graceful and inspiring representation of Victory, as created by a sculpturor called Paionios, who was from Mendes, a town in the Chalkidiki prefecture of Thrace, in northern Greece.

This dramatic sculpture depicts the moment Nike comes in to land after flight, descending from the heights of mount Olympos. The intricate detail of her mantle (himaton) evokes motion as she breaks through the air, and this motion presses her dress (peplos) tightly against her body whilst also exposing a breast and her foreleg. She wears a wavy tiara band around her hair and carries an palm branch in her right hand, which symbolises the fruits of Victory and which, upon landing, would be danced around. In her left hand, is an olive weath (kotinos) to adorn the head of a victor as a crown. At her feet, is an eagle, which suggests Victory in an ethereal sense.

The sculpture was made from the highly prized marble from the island of Paros that was known for its illuminative qualities as it permitted sunlight to penetrate a few inches from the surface and then radiate outwards.
The sculpture was approximately three metres in height and stood on top of a ten-to-twelve metre triangular pedestal.
The height of the pedestal meant the statue did not have its sunlight obstructed by other structures and, coupled with the Parian marble, it must have been an awesome sight for viewers to gaze up at.
The sculpture was situated in front of the Temple of Zeus, at Olympia in Elis, home of the famed Olympic games.
It was created around 420 BCE by Paionios of Mendes who, according to the inscription on the base of the pedestal, won the commission to make an acroterion for the Temple.
The inscription also says that the Messenians and the Naupaktians dedicated the statue to Zeus as a votive offering following a victory in a battle against an unnamed foe.
It has been suggested that the victory in battle was against the fierce Spartans in either the battle of Sphacteria or the battle of Pylos in 425 BCE, where both the Messenians and the Naupaktians fought on the side of Demosthenes' Athens.
This image was placed on many Olympic medals during the history of the festival, including the medals of the 2004 Athens and the 2012 London Games. 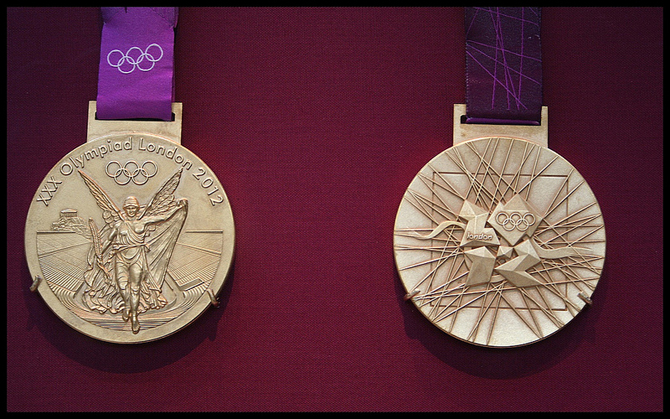 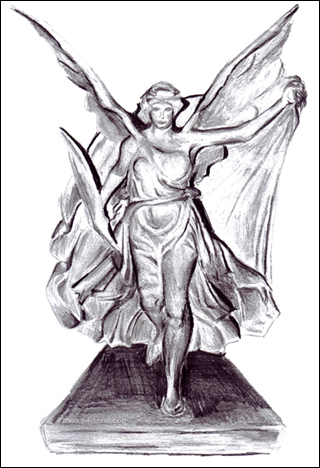 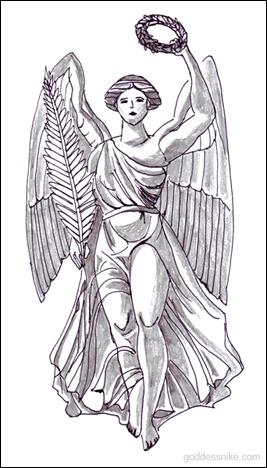